By Terri Ginsberg and Duncan MacDonald
Dr. Terri Ginsberg, Assistant Professor of Film, and Dr. Duncan MacDonald, Director of Visual Arts write about the late African American artist Robert H. Colescott (1925‒2009), one of the most important of the American modernists whose paintings are on display in numerous museums throughout the United States. During Black History Month 2021 (in February), in conjunction with the U.S. Embassy in Cairo, the AUC Department of the Arts set-up an exhibition of Colescott’s work at the Tahrir Cultural Center’s Margo Veillon Gallery. “Robert Colescott: The Cairo Years” revisited publicly, for the first time, four exemplary paintings from this crucial period, along with compelling archival documents, images, and records surrounding his work.

One must acknowledge AUC’s contribution to a small but vibrant Cairo art scene, for having welcomed the unconventional Colescott onto its faculty and having supported his endeavors to promote Egyptian Modernism, not least during one of the most precarious periods in the university’s history. 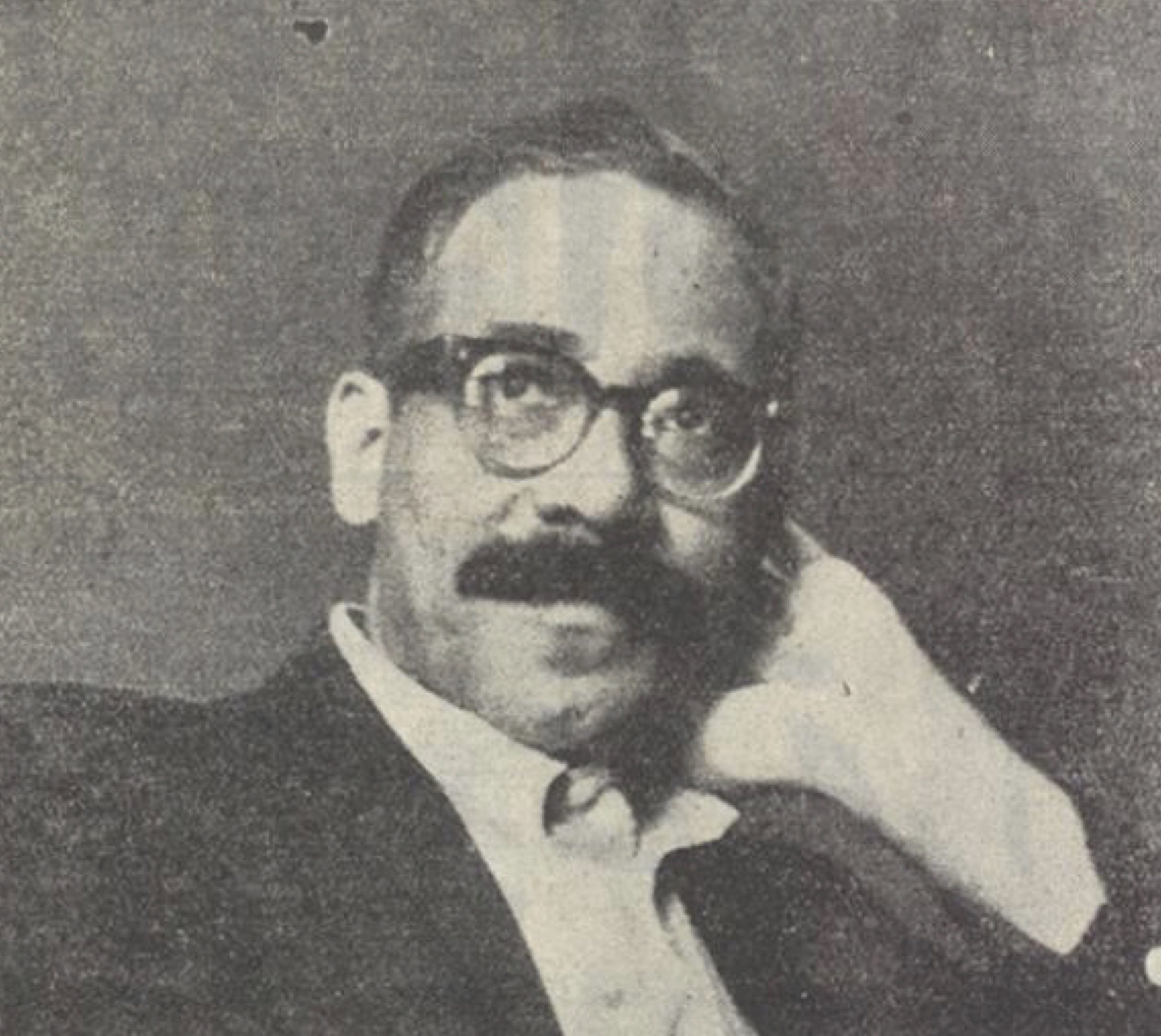 The late African American artist Robert H. Colescott (1925‒2009) is one of the most important of the American modernists. His paintings hang on display in numerous museums throughout the United States, among the most illustrious of which are the Smithsonian Institution, the Metropolitan Museum of Art, the Museum of Modern Art, and the Whitney Museum of American Art. In 2019, the largest and most comprehensive retrospective of Colescott’s paintings was launched and continues to date.

Robert Colescott’s paintings are known in particular for the transgressive and often provocative perspective they bring to the ever-timely issue of race in America. Colescott’s relationship to race was fraught throughout his early career, a period in which very few African Americans were visibly active either in the field of modern art or within academia. In 1964 Colescott took a sabbatical in Cairo with a Research Fellowship from the American Research Center in Egypt. Two years later, he returned to Egypt to take up a two-year position as the first Visiting Professor of Art in the Department of English and Comparative Literature at The American University in Cairo (AUC), where he was also probably the first African American faculty member, and where in February 1967 he launched the opening of the Corridor Gallery—the very first art gallery at AUC—by curating a month-long exhibition, “Eleven Artists,” that featured works by eleven relatively unknown Egyptian modernist painters who were to become some of the most important artist in Egypt and internationally. 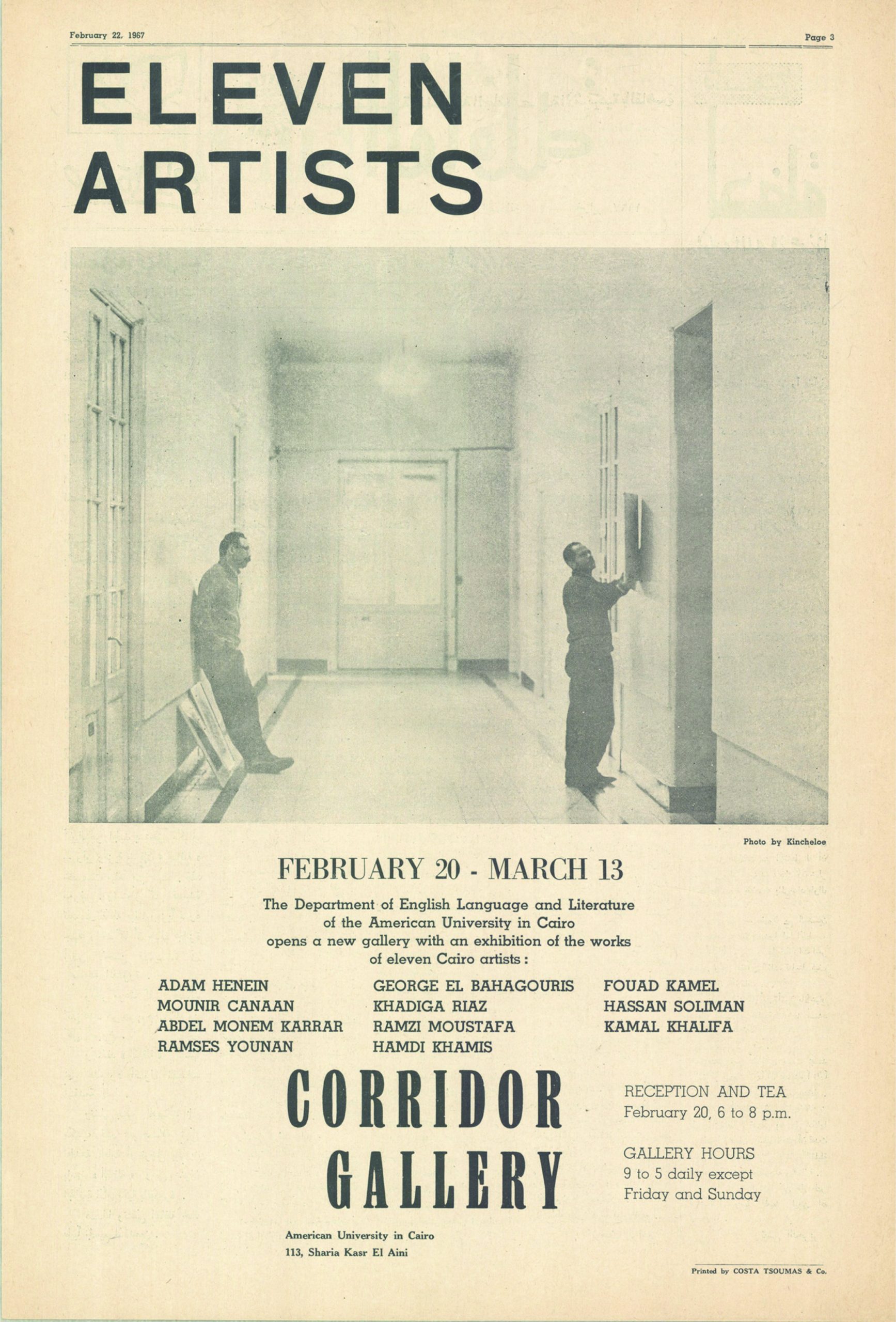 During the two years in total which he spent in Cairo (his visitorship was cut short one year by the Six Day War), Colescott underwent a personal transformation by which he came to embrace his Blackness in profound ways—a change which first became manifest in the works now referred to as his Cairo paintings.

“Robert Colescott: The Cairo Years” revisits publicly, for the first time, four exemplary paintings from this crucial period, accompanied by relevant archival documents, images, and video projections as well as more recent, audio interviews with art and cultural critics and historians. The exhibition, which will take place during Black History Month 2021, is housed in the Tahrir Cultural Center’s Margo Veillon Gallery, an uncannily appropriate space in which to display Colescott’s Cairo paintings, insofar as Colescott, like Veillon, was an avid supporter of Egyptian art and was as heavily influenced by his experience in Egypt as was the Cairo art world influenced by him. He says as much in a lecture he gave at the Carpenter Center for the Visual Arts at Harvard University in 1998, a video recording of which is scheduled for display at this exhibition. Colescott’s artistic journey began with mid-20th century abstraction, later shifted to figural abstraction, and ended with a potent and controversial pop-art play on depictions of African Americans in U.S. media and consumer culture. His departure from abstraction to figurative painting, encouraged by his Parisian mentor Fernand Léger, proved a pivotal moment in his artistic practice—and can be traced to the period in which he lived and worked in Cairo. There a transfiguration occurred in Colescott’s painting that not only resonated across his own subsequent artwork but changed the very history of art.

It is now well-known that abstract art became a trophy of the World War II victors—and, indeed, as the U.S. government strenuously promoted Abstract Expressionism as a Cold War political tool, the figurative art associated with the 19th century became less and less visible internationally. During his time in Cairo, Colescott began to rethink the global re-entrenchment of racialized, Eurocentric understandings of art and culture ensuing from this aesthetic shift. He created meaningful dialogues with, and helped promote, many local artists to whom we now refer as the Egyptian Modernists. In turn he came to question historical tendencies in artistic creation and thus to recognize important distinctions between Western-focused “High Modernism” and marginalized—while nonetheless undeniably modernist—movements which had emerged within the non-Western art world. Colescott appreciated the fact that contemporary Egyptian art had evolved under unique conditions that enabled its particular retention of cultural perspectives not easily translatable into foreign narratives. This critical standpoint—one of healthy skepticism which he shared with the Egyptian Modernists—led Colescott, upon his return to the United States several years later, to start integrating such concerns into his artwork, henceforth becoming renowned for bringing the problematics of U.S. race relations and racial (mis)understandings to an unprecedented cultural fore.

The significance of a retrospective on Robert Colescott’s Cairo paintings cannot be underestimated. At the present historical moment, to revisit Colescott’s discoveries and innovations while in Egypt and at AUC is to celebrate the history and legacy of African American art and the progress made possible for it by an important U.S. educational institution abroad. By the same token, the dialectic of U.S. cultural diplomacy which played out during the Cold War, exposing rock ’n roll and jazz, among other distinctly (African-) American inventions, to a gradually decolonizing world, and which enabled the very possibility of Colescott’s presence in Cairo, was never entirely capable of containing what it had served to unleash: a platform for the expression of aspirations—both local and international—above and beyond that dialectic, for visions and expressions of freedom and liberation not normally perceived or promoted by the architects of the Marshall Plan. In this context one must acknowledge AUC’s contribution to a small but vibrant Cairo art scene, for having welcomed the unconventional Colescott onto its faculty and having supported his endeavors to promote Egyptian Modernism, not least during one of the most precarious periods in the university’s history. 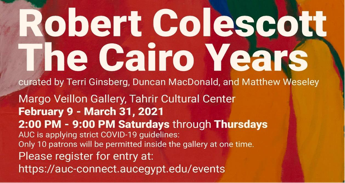