What Have You Done, Netflix?

How are industry players dealing with the new challenges and opportunities?

By Ehab Abdelhamid
Translated by Humphrey Davies
Toward the end of 2020, seven years after making its debut in the world of TV show production with the serial House of Cards in 2013, Netflix released Paranormal, its first Egyptian serial.

The digital platform appeared in the Middle East in 2016 and became available one by one to the audiences of the Arab world. Its first Arabic program was produced in March 2018, in the form of Live From Beirut, presented by Lebanese broadcaster and actor Adil Karam. This attracted little attention at the time but was followed in 2019 by Jinn, its first TV show in Arabic, which caused an outcry because of its unusual daring, for an Arabic show.

As in Genies, the events of Paranormal unfold in a fantasy world. Cinematic, or TV serial, work is normally identified by its production address. However, with the appearance of digital performance platforms, this principle appears to have gone by the board. Thus the two serials mentioned above, despite being “officially” non-Arab, meaning that they were produced by an American company, are referred to by all, and rightly so, as “Arab.” The first serial was Jordanian, directed by Mir-Jean Bou Chaaya, a Lebanese, and Amin Matalqa, a Jordanian, and was shot in Jordan with mostly Jordanian actors and in Jordanian dialect. The second was Egyptian, directed by the Egyptian Amr Salama with mostly Egyptian actors and in Egyptian dialect. 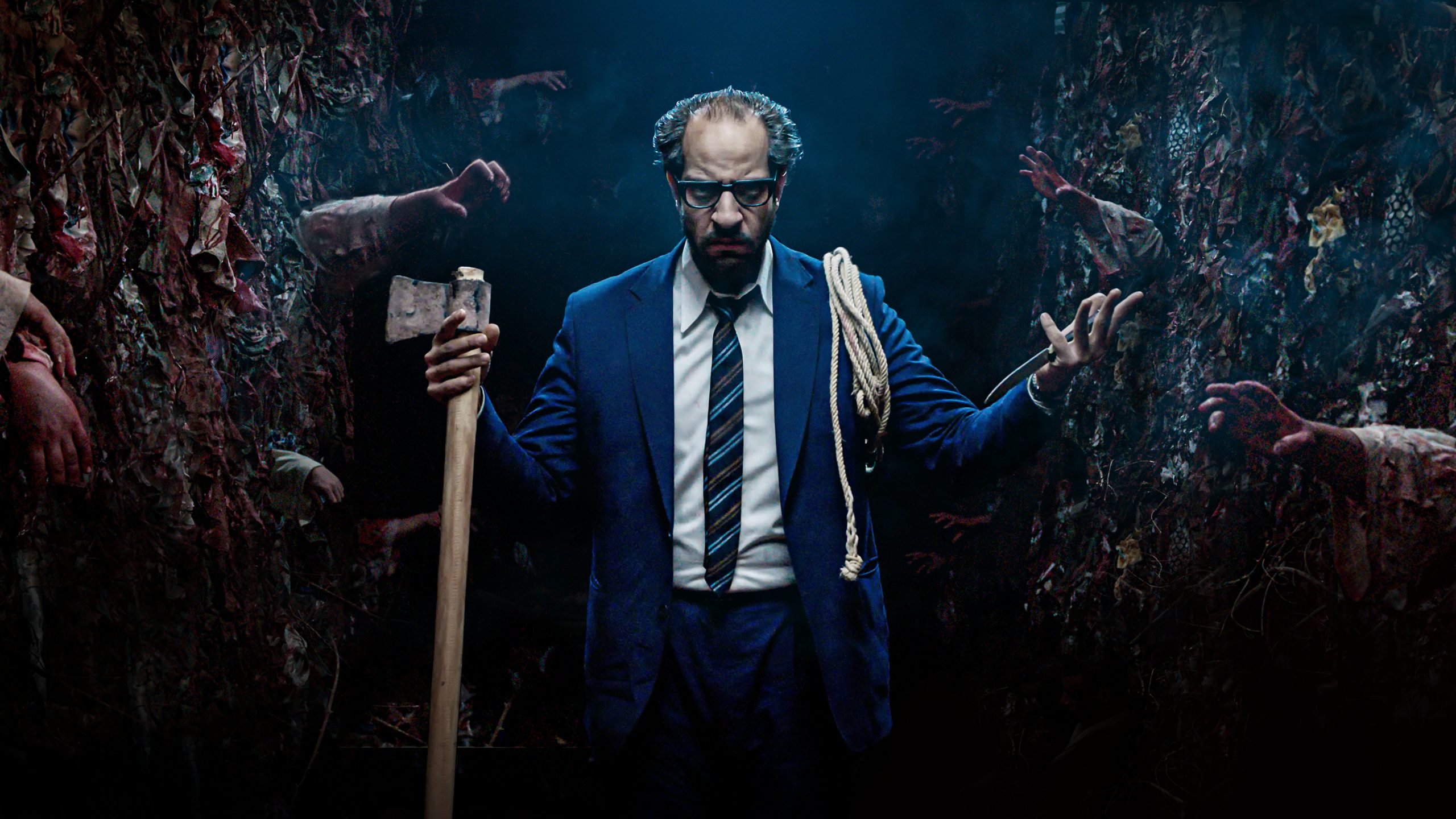 The buzz surrounding Paranormal was not due solely to the fact that it was the first Egyptian serial to be produced by Netflix but also to its origin in the novels of Ahmad Khalid Tawfiq, a writer who has gained wide popularity with the younger generation, who began reading him as children, starting in 1993 when the first in a series of novels with the same name as the serial appeared, and continuing until 2014, when the series came to an end with the death of its hero.

This buzz has made the serial indubitably the most widely viewed in Egypt on the giant platform.

Director Amr Salama never ceased expressing on social media how happy he was at the numerous successes realized by the serial, starting with its inclusion on the list of 250 Top Rated Movies as rated by IMDb Users (from which it has recently and tragically been deleted, due to accusations that Tawfiq’s friends and supporters were fraudulently interfering with the voting) and most recently (but, no doubt, not finally) with its dubbing into eight languages—English, French, German, Spanish, Italian, Turkish, Polish, and Portuguese.

Salama’s enthusiasm for the work has led him to instruct his audience in the best way to watch it, declaring that “The serial should be viewed legally, at the highest quality, and on high-speed internet; I would like it to be viewed on a large screen, not a cellphone or tablet; watched in a dark room at high volume, the sound being essential to the viewer’s experience; Likewise, I’d hope there’s no eating or side conversations or chat: we ought to focus, because in every shot some poor guy is suffering.”

The audience reacted to what he called his “viewing instructions” with a fierce attack on the director along the lines of “Who are you to tell us how to behave while watching?” It is possible, however, to read Salama’s instructions in the light of a dilemma that will dominate the cinema industry and how movies are to be consumed during the third decade of this century of ours.

The first part of his directives relates to “legal viewing.” In fact, Netflix and the other digital performance platforms have adopted the best possible policy to combat illegal viewing by keeping the subscription cost within the viewer’s means. In Egypt, it costs a single viewer five dollars a month (less than 80 Egyptian pounds per viewer). This price is the strongest deterrent to illegal viewing: if you can watch such an amazing number of the best films and TV shows for such a tiny sum, why resort to the pirates?

The second part relates to the new way in which films are consumed. Salama, like filmmakers all over the world, pines for that celebrated “magic of the cinema” and is committed to it. Cinema, by nature, is a “semi-live” art. True, it does not, like the theater, create direct contact between the performers and the audience but it gives the impression of creating such contact.  This impression has for long depended on the “atmosphere” imposed by the auditorium, an atmosphere that itself depends on controlling your senses and forcing you to leave them outside in the real world, then draws you into a “magical” world imagined on a screen large enough to fill your entire field of vision while the darkened auditorium prevents the latter from being distracted by other elements, a loud, hegemonic voice dominates your hearing, and you sense the audience sitting around you in a space that was, in the past at least, so huge as to make you feel that you were in a real theater watching a play performed by live actors. And on top of all that, some unnamed power prevents you from leaving your place to perform a task or deal with any other matter.

What worries Salama about the new style of viewing—“home viewing,” as it is known—is his deprivation, as a director, of these “magical” elements. This loss, which began with the loss of control over the way movies are watched in cinemas, may put paid altogether over the next ten years to traditional cinemas and make them into a thing of the past. Salama cannot imagine the conversion from a performance on the “golden screen,” of which every director dreams, to a performance on the “silver screen” or television, and finally to an attenuated performance on the “bronze screen” of the cell phone or tablet.

Some young people will, of course, choose to view this and other works on an extremely small screen. However, the fact is that the digital performance platform provides those who want it with an experience very close to that of the “golden screen.”

Given the economics of the day, cinemas have shrunk in size and screen area has shrunk along with them. Nowadays, the movie-lover can invest in a television screen (or projector) that is not much smaller than the screen in a small cinema. He can easily create darkness and can easily buy top-quality speakers that produce sound not greatly different in quality from that at a cinema. If he adds to this the company of five or six friends (and not the annoying audience member whom luck usually places in the seat behind you at the cinema), he can achieve viewing conditions similar to or better than those of a cinema at home. Add to this the advantages of not having to pay for an outing to the cinema (starting with the cost of the ticket, of transportation, of refreshments, and so on, and not ending with the choice of a sympathetic rather than an annoying audience and with not having to peer through the censor’s filter, as well as other advantages that viewing platforms provide on demand such as dubbing and subtitles, the possibility of stopping whenever you need to, and the wonderful variety of material on offer) —and it seems likely that the future of  “cinematic viewing” outside of the cinema may be anything but dark (in the negative sense of the word).

Such platforms (which are not limited to Netflix but include, at the global level, Amazon, Disney, Apple, and Hulu, and at the Arab level, Shahid, WatchIt!, Wide Khaliji, and more) will push the future in the above direction and in another direction too, namely that of “the long TV show” divided into episodes and seasons, at the expense of the traditional cinematic work (the film) with its set duration of no more than one and a half or two hours. The heavyweights of cinema have turned to serialized work; there is a certain logic to this. In the traditional industry with its dependence on the traditional medium of performance, “cinematic” works cannot be produced in serial form. However, the possibility of extending the cinematic work offers many opportunities.

There is the opportunity to consider more novelistic works, and with greater detail rather than simply following the main thread of the plot and trying to adapt it to the short timeframe. Why not engage with life’s subsidiary stories? Why not engage with the details of the details? Why not engage with the ephemeral characters who give us a minute from their lives before being brutally expelled from the movie by the director because it has a set duration? All of this opens wonderful prospects for another kind of cinema—a kind, it would seem, that will be predominant in the coming decade (along with improved internet service and speed and the further spread of, and increased customer familiarity with, electronic card payment in Egypt and the Arab region). And just as the novel has gained wider popularity among readers than the short story in an era whose fortune tellers predicted precisely the opposite on the grounds that this is the “age of speed,” so is to be expected that the “serialized cinematic work” will gain wider popularity, in keeping with all the prospects that unlimited output length will bestow on it.